International Day of Light 2019: Raising Awareness of the Significance of Light

Light plays a major role in science, culture and our society. After the successful inauguration in 2018, the Day of Light will be celebrated next year on May 16 with many actions, events, and lectures. For the registration of organizations and companies appointments, the official calendar is now online. International Day of Light 2019 events can be hosted on or around May 16, 2019.

In collaboration with UNESCO there will be a special, focus for 2019 on the use of light science as a means of stimulating education in science and engineering, especially in developing countries. This topic will be called ‘Illuminating Education’ and will be the subject of a special one-day conference held at Trieste, Italy, on May 16. 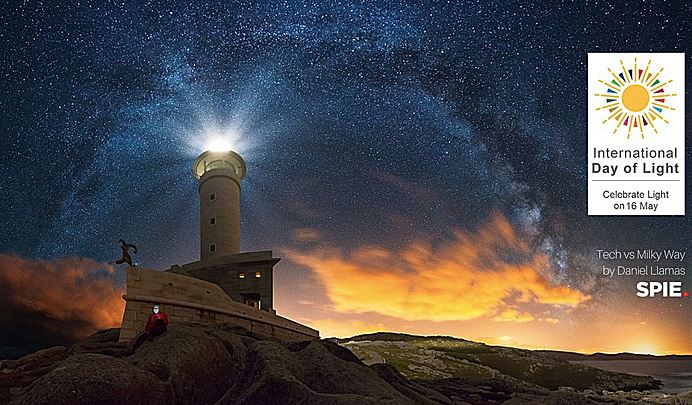 For the celebration of the International Day of Light in 2019, events focusing on all aspects of light science and applications will again be supported. Picture credits: SPIE

The conference starts with a lecture on light in nature followed by thematic sessions covering areas of education, entrepreneurship, career development for young researchers, and the use of light as a lever for sustainable development.

Day of Light: An Enduring Legacy

Under the leadership of UNESCO, the first International Day of Light was celebrated on the 16 May 2018. Over 640 events took place worldwide in more than 80 countries, kicked off by a spectacular inauguration at UNESCO headquarters in Paris. The Day of Light shall be an enduring legacy of the International Year of Light in 2015 and continue the cooperation between science, culture, decision-makers, industry leaders, and the public.

Many other partners are actively preparing their own events for 2019, and events can now be registered for inclusion in the official International Day of Light 2019 calendar at www.lightday.org.

The Genius Loci Weimar Festival celebrates its 5th anniversary on the weekend of August 12th -14th 2016, inviting to a nocturnal tour to the Ilmpark to experience the special charme of this historical landscape garden and UNESCO World Cultural Heritage site.

Since 2012 the Genius Loci Weimar Festival for videomapping and facade-projection utelises light and sound to bring the buildings of Weimar to life. Using state of the art projection-technology, facades, spaces and objects are „brought to light“. The main idea is to capture the genius loci – the spirit of the place – taking in the history, the architecture and the people associated with the place and to make this spirit perceptible through videomapping.

The winning entries of this years videomapping-competition will be shown on the pitoresque ruin of Tempelherrenhaus, the Sternbrücke and on a special installation of water-screens at the Stern. At Hafis-Goethe-Denkmal the winners of the spatial audio competition will create an audible dialog between the oriental and the occidental world.

Last edition of the Genius Loci Weimar Festival – a city brought to light!

This year the Genius Loci Lab – the festivals audiovisuel adventure playground – takes place at the E-Werk close to Ilmpark and Sternbrücke.
AV artists, vjs, musicians, light- and interior designers get together already in the week leading up to the festival to develope their collective live-shows and spatial interventions. The labs program is varying, dynamic and diversified. None of the shows is like another.

Starting at 06:00pm audiovisuel live-concerts at the Lichthaus will guide you into the evening. All the night lovers can enjoy the Genius Loci Club at Kesselhaus on Friday and Saturday.  The Tickets for the concerts at Lichthaus and the club can be purchased directly in the evening at the locations. All shows in the outdoor areas and the park are openly accessible and for free.

The Weimar community is looking forward to your visit! More information is available at the event website.

Pictures in this post are courtesy of GENIUS LOCI WEIMAR.

IYL 2015 opens with Ceremonies in Paris

Optical technologies for simple lighting, inexpensive eyeglasses, and solar power were among the many and varied applications of light celebrated during the second day of ceremonies last week at the UNESCO headquarters in Paris. The IYL2015 Opening Event drew more than 1,000 participants to help launch the United-Nations-declared International Year of Light and Light-based Technologies (IYL 2015).

It was one of the first IYL 2015 events in an year-long observance intended to raise awareness of the importance of light-based technologies in providing solutions to worldwide challenges in areas such as energy, education, communications, and health. 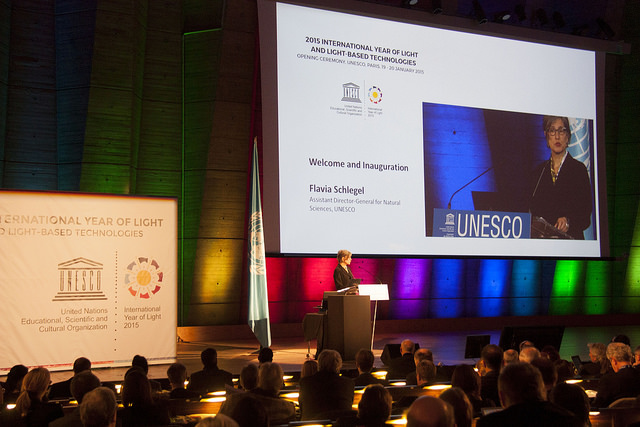 In a well-received and inspiring session on Light Solutions, three presenters described highly successful programs that are making huge improvements in quality of life in several areas of the world. Here are their main topics hightlighted:

Illac Diaz told how A Liter of Light is using very low technology — a plastic bottle filled with water and chlorine — to create a 55-watt solar bulb powerful enough to light up a home while being environmentally friendly, inexpensive, and easy to make.

Martin Aufmuth described how OneDollarGlasses is changing lives by providing locally manufactured glasses at low cost to some of the approximately 150 million people worldwide who need prescription eyeglasses but cannot afford them — and who may be unable to work to earn money without them. 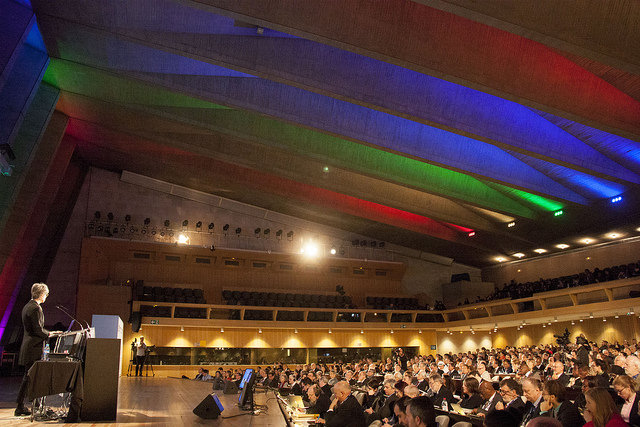 Linda Wamune explained the SunnyMoney program, which provides solar-powered lights and chargers in African communities to enable more hours in the day for activities such as studying. Wamune said that the program is successful in part because the lights are sold rather than given away. People in Africa can afford such small technology devices, she said, and they place more value on what has been purchased, as the perception is that items that are given away are of lesser quality. 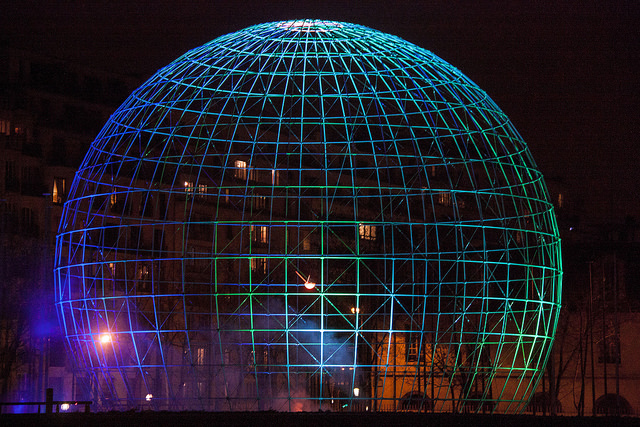 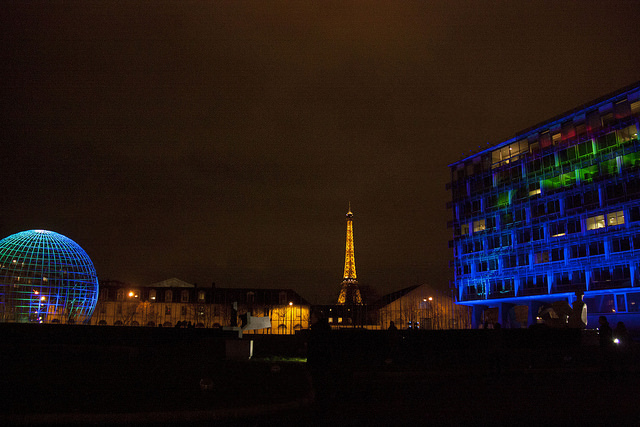 Panelist Naledi Pandor, South African Minister of Science and Technology, pointed out a disconnect between Africa and the rest of the world, saying that the continent is often excluded from initiatives that are nominally “global.” The continent needs to raise its profile with well-crafted science policy, building human capital in a wide range of disciplines, and making sure researchers have academic freedom and the infrastructure to work, she said.

Ana María Cetto noted that international cooperation can be a catalyst, but if countries don’t come up with their own solutions, “whatever comes from outside may help, but it does not replace what countries do themselves.”

“Every closing is an opening,” observed Maciej Nalecz, UNESCO Director of the Division of Science Policy and Capacity-Building — the closing of IYL 2015 ceremonies are just the beginning of a year full of activities.

A post with thanks to Amy Nelson – Public Relations Manager at SPIE. Pictures via Flickr, courtesy of UNESCO/P. Chiang-Joo.

By the end of 2013, the United Nations (UN) proclaimed 2015 as the International Year of Light and Light-based Technologies (IYL 2015). This International Year has been the initiative of a large consortium of scientific bodies together with UNESCO, and will bring many different stakeholders including scientific societies and unions, institutions, technology platforms, non-profit organizations and private sector partners together.

In proclaiming an International Year focusing on light science and its applications, the UN has recognized the importance of raising global awareness about how light-based technologies could promote sustainable development and provide solutions to global challenges in energy, education, agriculture and health. Light plays a vital role in our daily lives and is an imperative cross-cutting discipline of science in the 21st century. It has revolutionized medicine, opened up international communication via the Internet, and continues to be central to linking cultural, economic and political aspects of the global society.

The Chairman of the IYL 2015 Steering Committee – John Dudley – explains: “The International Year of Light is a tremendous opportunity to ensure that international policymakers and stakeholders are made aware of the problem-solving potential of light technology. We now have a unique opportunity to raise global awareness of this.” 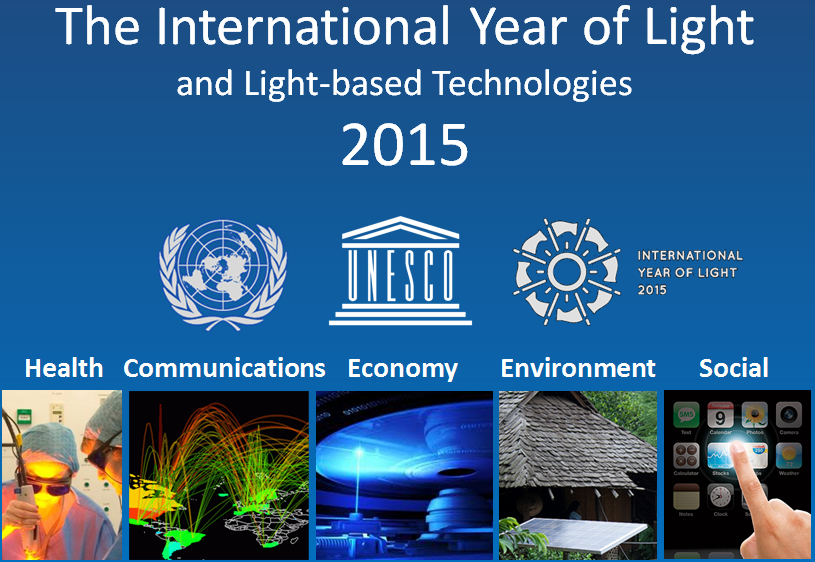 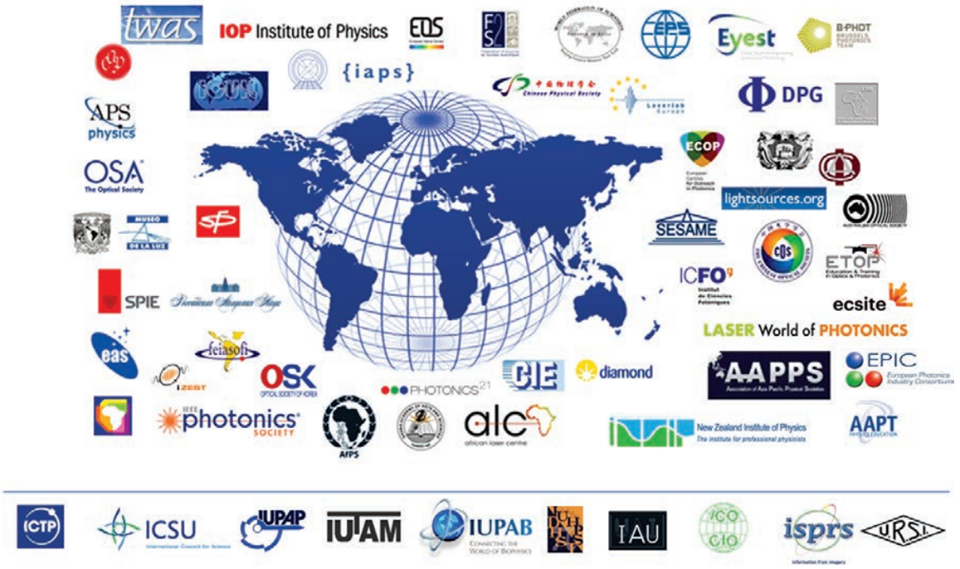 IYL2015: proclaimed by the UN and supported by various stakeholders.

The IYL and its spin-off will be provide a great basis for a lot of new Lighting Inspiration. Various professionals in the field of lighting – in special Lighting Designers – use the IYL to gain recognition of the strategic value of their profession.

Please stay tuned and check back here for updates and links frequenty, we’ll keep you informed!