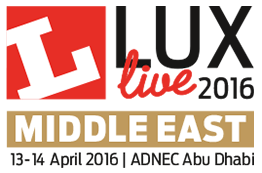 Following the massive success of LuxLive in the UK, the organisation is delighted to bring this unique and exciting lighting event to the Middle East: LuxLive Middle East 2016.

On 13-14 April, LuxLive Middle East 2016 take place at the Abu Dhabi National Exhibition Centre – to create a must-attend show for anyone involved in the specification, installation and maintenance of lighting systems throughout the region.

With over 4,000 square metres of exhibition space, over 100 of the world’s leading lighting brands and over 3,000 key decision makers and specifiers from across The Middle East, LuxLive is set to be the most talked about lighting event ever staged in the region.

LuxLive Middle East 2016 will incorporate our exciting new event ‘lightspace’ which will bring together the lighting architect, commercial interior designer, landscape architect and lighting designer in two days of inspirational talks by some of the biggest names in the region and from around the world.

LuxLive tackles, head-on, the lighting issues that are faced by key end user sectors. Find out what’s on for you!

Strategies in Light Europe (SILE 2015) made its debut in London last week with co-located LuxLive 2015 and LightSpace.London 2015. The combined events attracted more than 8,000 attendees from over 80 countries underlining the truly international appeal of these events.

Over 40% of exhibitors polled used SILE 2015 to establish new business contacts, while over 35% used the event to sell products in the long term.

Attendees – 22% of SIL Europe attendees polled were Lighting Manufacturers, while 10% were counted to the Lighting Designer profession;

Keynote – This much anticipated session featuring presentations by Zumtobel, iGuzzini and Phillips Lighting brought in an enthusiastic audience of 116 Lighting professionals;

Plenary – With an esteemed panel of speakers from Strategies Unlimited, Schneider Electric and GE Lighting, the Plenary session attracted a large audience and prompted some lively discussion;

Don’t forget to mark you calendars when the show returns for another edition next year to ExCeL on 22-24 November for LuxLive 2016 and SILE 2016!