In Vietnam, LEDs were initially used in traffic lights and the advertising industry. However, with the raising awareness about the advantages, LEDs are now being used in various sectors such as residential lighting, street lighting, retail lighting, etc. According to a new report by Expert Market Research, the Vietnam LED lighting market reached a value of US$ 229 Million in 2018 and is further expected to reach US$ 461 Million by 2024. LEDTEC ASIA 2021 offers a platform where suppliers of various lighting solutions meet their buyers.

The production of LEDs in Vietnam has witnessed significant growth during the year 2014-2018, for a number of reasons. With the rising environmental concerns and increasing expenses on the generation of electricity, the Vietnamese government is encouraging the use of energy-efficient lights. The growing use of LEDs in high-tech products such as television, digital camera, smartphones, and automotive have also resulted in higher demand for LED lighting solutions in Vietnam. Moreover, urbanization, rising population, increasing disposable incomes represent some of the other factor which have further facilitated the market growth. 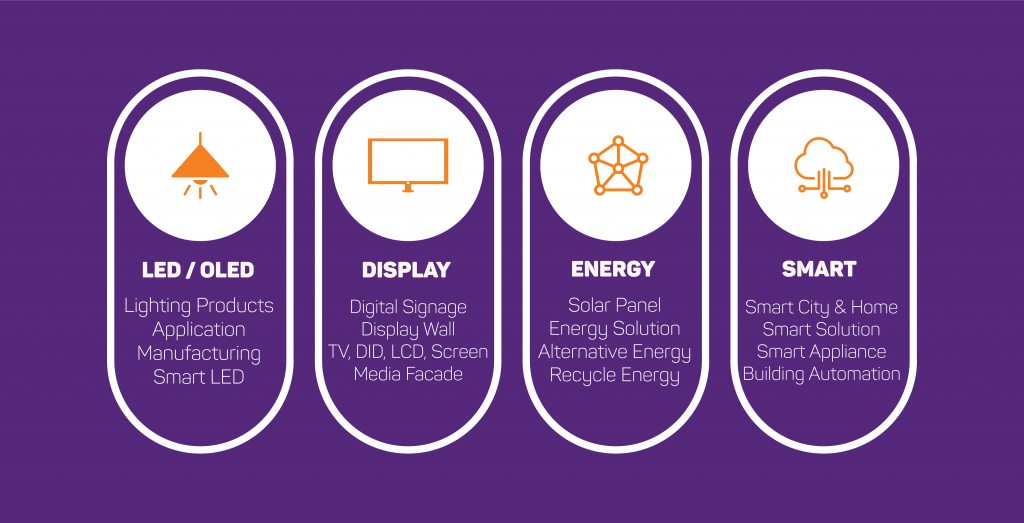 Picture: A cross-section of the LEDTEC Asia 2021 event wih the main sectors explained.

Asia-Pacific has several developing nations with rapidly developing economies. There have been large scale investments by major players, in various regional industries. In Vietnam, there exists cut-throat competition between the companies of the neighboring origin and large multi-national corporations trying to establish a foothold on the regional market. Technological advancements in the recent past have led to the development of OLED lighting that offer much clearer picture and are not very expensive, then the other available solutions.

The retail industry was expected to be the largest revenue shareholder in the display advertising revenue. Vietnam lags behind on the economic scale, as compared to the neighboring nations in the region, and is expected to witness significant growth in the near future, owing to the increasing interest of large conglomerates willing to enter the market and compete with local manufactures and enterprises for control over the market.

LEDTEC ASIA 2021 is an excellent platform to start or evolve your lighting business in Vietnam:

– It is he Only LED/OLED Lighting & Digital Signage Show running in Vietnam;
– Established event in the LED market (launched 2012);
– Attractive buyer profile: multiple sectors, including top 100 buyers in the market;
– Recurring visitors: Continuous Updates to Exhibitors / Buyers of previous shows;
– Display of latest trends and technology on the market.