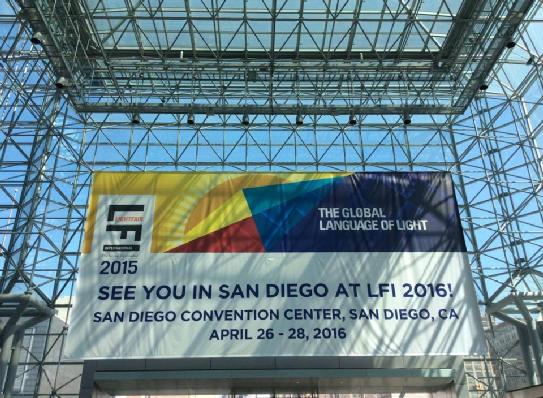 Lightfair 2016: Another 5-Day Lighting Event That Uncovers the Future of Lighting & Design Solutions and Knowledge

LIGHTFAIR® International will produce its 2016 west-coast event in San Diego in a strategic move signaling continuing growth for the annual architectural and commercial lighting trade show and conference.
The 2016 staging at the San Diego Convention Center marks the San Diego premiere for LFI, which is produced alternately annually in large east- and west-coast venues. The San Diego location follows LFI’s long-running staging in Las Vegas at the Las Vegas Convention Center, its west-coast venue beginning in 1998, continuing in 2001 and then recurring in even years 2004-2012.

The San Diego Convention Center size and scale, together with its proximity to extensive hotel facilities and transportation resources and services, is a defining factor in the LFI 2016 location decision.  With more than 500,000 square feet of exhibit hall space, the Center is well equipped to house LFI’s rapidly growing presentation of lighting, energy and design products, systems and technologies. San Diego and the San Diego Convention Center afford LFI 2016 exhibitors and attendees a destination and venue well-suited to the unique requirements of its Conference and Trade Show.

LFI 2016 San Diego: New Doors to the Future of Lighting

For LFI and its global business base, San Diego opens yet another new door to the future with its spectacular combination of Pacific-coast location, superb facilities, unrivaled accessibility and a beautiful, soaring city. The 2016 San Diego location decision is based on extended study and customer dialogue, including independent quantitative and qualitative research conducted among LFI exhibitors and attendees.  San Diego emerged as the clear preference among LFI’s global customer population, which includes top lighting designers, specifiers, design engineers, lighting architects and other experts from the lighting profession.

More information on Lightfair 2016 to follow soon. Please mark your calendar and make sure you won’t miss the next edition of Lightfair!