LIGHTFAIR® International (LFI®), the world’s largest annual architectural and commercial lighting trade show and conference, returns to Philadelphia’s Pennsylvania Convention Center in 2017 for its 28th-annual staging May 7—11. Produced annually alternately on the east and west coasts, LFI was last staged at the Pennsylvania Convention Center in 2013. The Lightfair 2017 return to Philadelphia will follow Lightfair 2016 showing in San Diego at the San Diego Convention Center, the event’s newest west-coast venue. LFI’s San Diego event will run April 24—28, 2016. 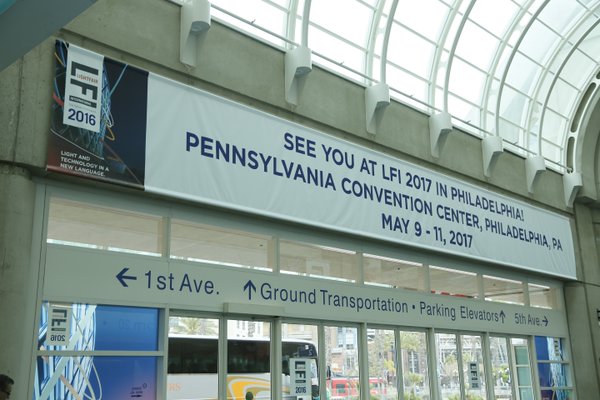 LFI 2015 broke all registration and trade-show records with double-digit growth marking the largest staging in its history. It set an all-time trade show floor record with 268,580 net square feet housing 599 exhibitors. Registration grew to 29,900, a 15% gain over the previous record set in 2014, with representatives from 89 countries.

“Philadelphia and the Pennsylvania Convention Center afford our global customer base a highly accessible and accommodating venue, well-scaled to the expanding space and service demands aligned with LFI’s continuing growth,” Portman notes. “Our Lightfair 2013 experience there was positive and productive. We fully expect LFI’s 2017 showing to exceed those high marks,” Portman adds.

For LIGHTFAIR International 2017, the Pre-Conference program will take place in Philadelphia at the Pennsylvania Convention Center Sunday, May 7 – Monday, May 8 and the LFI Trade Show and Conference will run Tuesday, May 9 – Thursday, May 11.

LIGHTFAIR® International is the world’s largest annual architectural and commercial lighting trade show and conference and is sponsored by the Illuminating Engineering Society (IES) and the International Association of Lighting Designers (IALD).